“…but what would Malevich say?”

When we first asked Donald Judd in 1992 if he would want to show his works side by side with Malevich works selected by him, he answered: “I think it’s good, but what would Malevich say?” Such modesty from Donald Judd, known for his willpower, showed his enormous respect for the work of Kazimir Malevich. Galerie Gmurzynska had known Judd since the 1960’s as a connoisseur, critic and collector, who often came to the gallery during his frequent trips to Cologne.

After our visit to Marfa and with the continued support of Rudi Fuchs, as well as Rainer, Flavin and Michèle Judd, the exhibition entitled “The Moscow Installation” became a reality and opened on March 5th, 1994, at the gallery in Cologne. Donald Judd died on February 12th, 1994, only weeks before the opening. It thus became his last exhibition.

Today, 23 years later, it is with tremendous pleasure that we are inaugurating our new exhibition space in Zurich with an exhibition of JUDD / MALEVICH, curated by Flavin Judd, accompanied by this in-depth publication with texts by Flavin Judd, Dr Evgenia Petrova (Deputy Director of the State Russian Museum) and the historical text by the famed curator and art-historian Rudi Fuchs. We are grateful to everyone who has helped in bringing together this historically relevant exhibition and publication.

In reference to the dual exhibition titled The Moscow Installation, originally realised with Donald Judd at Galerie Gmurzynska in 1994 and featuring the works of Judd and Malevich, the forthcoming exhibition pays homage to the artistic and intellectual connections of the two artists. The exhibition is curated by Flavin Judd, Curator & Co- President of Judd Foundation and the son of Donald Judd.

“I would love it but what would Malevich say?” These were the words of Donald Judd in 1992 when asked by Galerie Gmurzynska if he would want to show his works side- by-side with works of Kazimir Malevich.

Changing the course of art and its intellectual and practical underpinnings up until today, these two artists conceived an entire world of creation – a Gesamtkunstwerk – ranging from painting to academic writing, to architecture, porcelain and furniture design, among various other fields.

Flavin Judd notes in his essay “Black” featured in the forthcoming JUDD / MALEVICH catalogue, “The superficial similarities in the squares of Judd and Malevich are distanced when one understands the reasons behind them. For Malevich the abstraction of art, the forgetting of the figure was a way to move towards a future of mankind. For Malevich the abstraction of form and color was towards the biggest thing imaginable: a paradise of the infinite, power, and spirit.

For Judd’s art it is the reverse. There is no spirit, there is no infinite, there is just what is there, an empirical radicalness of art that wants to go back to basics, to stones on a beach, not infinite, just existing as it is. In this exhibition, Malevich’s grand designs and verbose metaphysics are met by Judd’s specific locations and a knock on a table. For Judd there is no possibility of a society beyond a small family; there is no future that is not just a repetition of the power structure of the past; there are things and there are people, the two are not the same and the individuals have to project their own space.”

The exhibition features two major oil on canvas works by Kazimir Malevich from 1915 and 1917 as well as over 20 important drawings from different periods of the artist’s oeuvre. The exhibition will feature an installation of eight works by Donald Judd in plywood and aluminum from the 1980s and 1990s as well as seven newly fabricated, and previously unrealized, examples of his furniture. 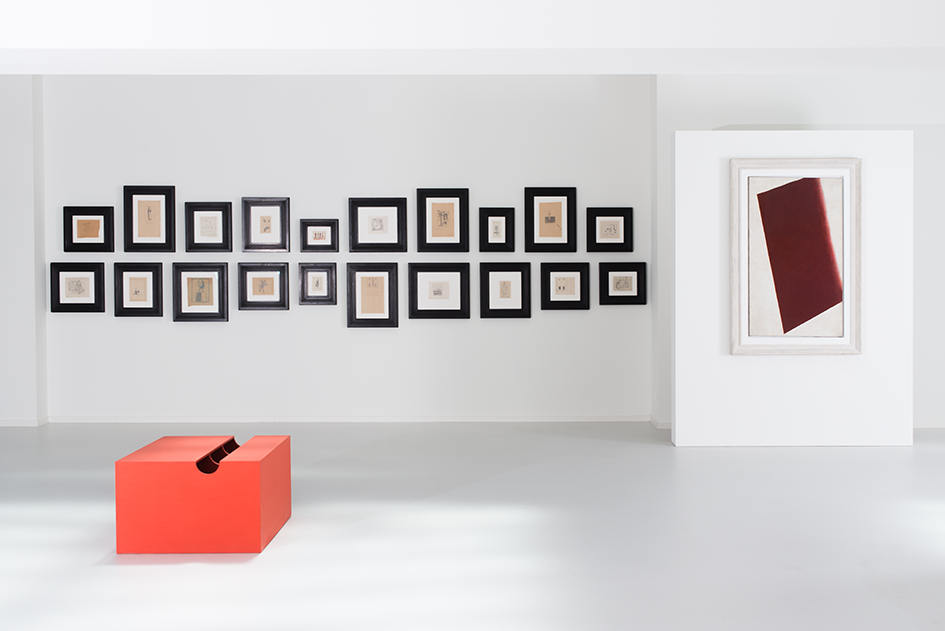 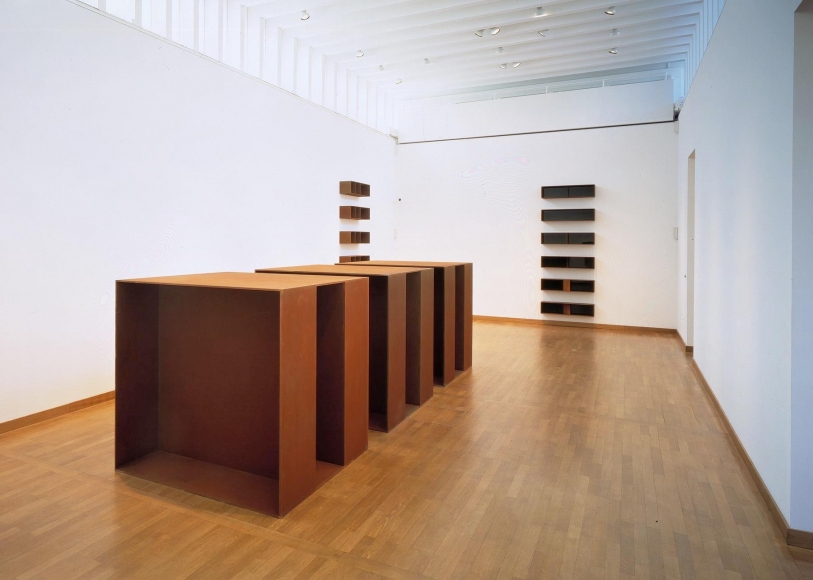 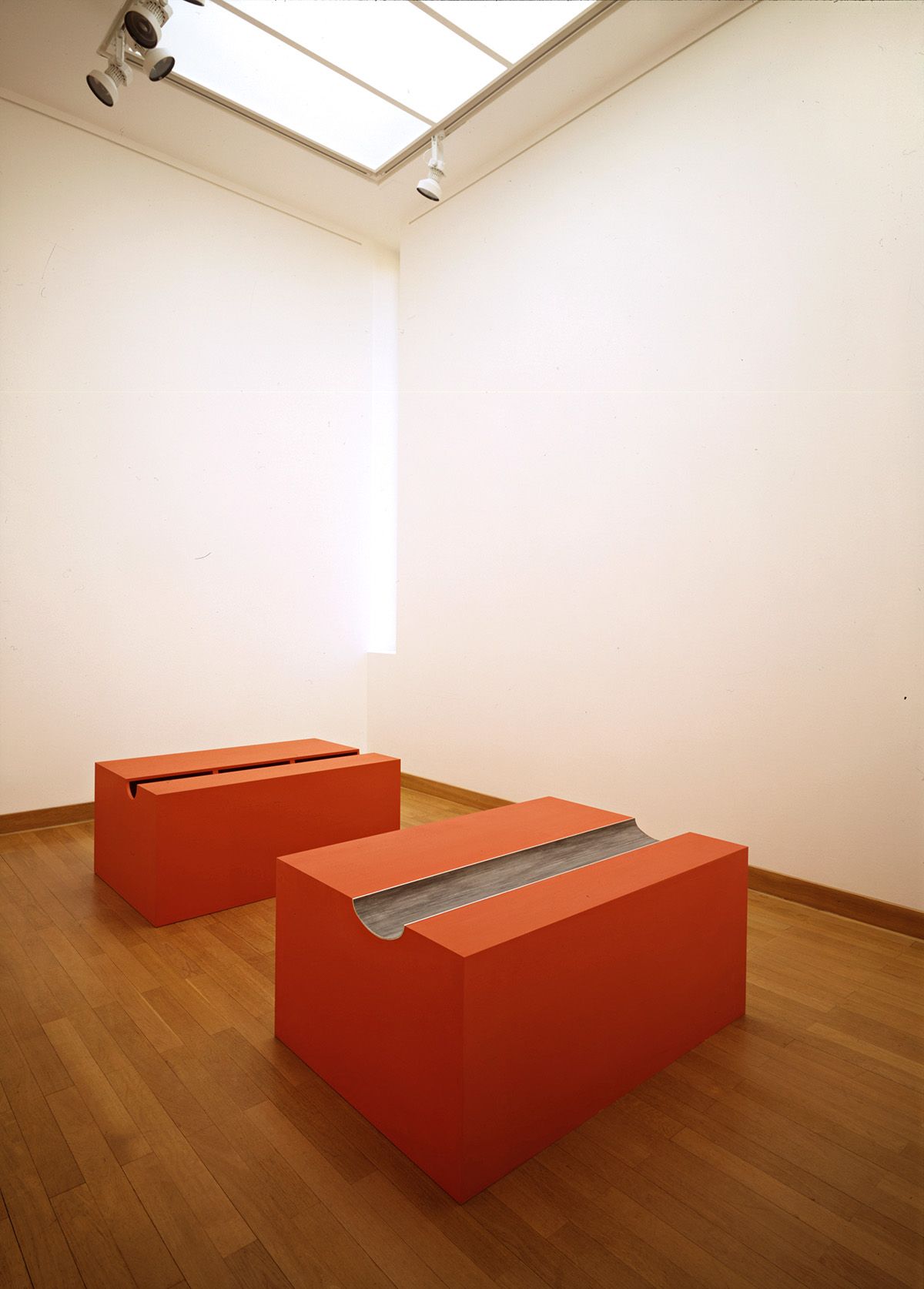