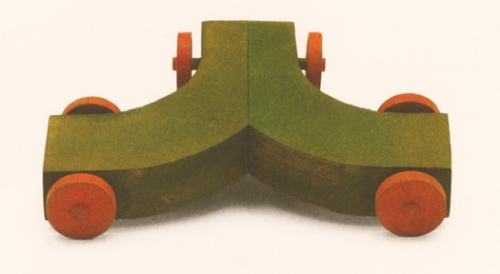 In recent decades the relationship between the art of the 20th century and play, education, childhood and the primitive has been the subject of a considerable number of exhibitions. Some have focused on traditional toys, others on games and toys designed by the avant-gardes or by modern artists, architects and designers, while others have looked at children's drawings and literature, artists' books and those illustrated for children. Nonetheless, no exhibition has resulted from the research that has traced the influence that the new pedagogical models which appeared in the 19th century concerning both children's education and the teaching of drawing - the basis of artistic practice - had on the avant-gardes (and hence on the art, architecture and design of the entire 20th century, which were their heirs).

The visual account offered in Playing Art. Education, Art and Design aims to reveal how the innovative pedagogical theories of the 19th century that were most radically based on play and on the experience of "drawing for all" - inspired by Émile (1762) by Jean-Jacques Rousseau (1712-1778), the best-known practical expression of which is perhaps the Kindergarten system devised by Friedrich Froebel (1782-1852) - have provided a highly effective but equally underappreciated starting point for the great shift introduced into tradition by modern art.

The Fundación Juan March's Education team has developed a series of playful and educational activities aimed at the different academic years. These offer workshop activities to take place at school following a guided tour of the exhibition.