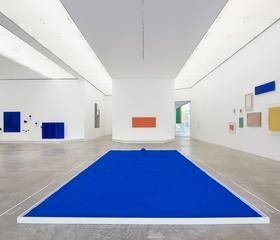 Yves Klein is the first retrospective in Latin America on the pioneering artist of action art and the immaterial practices of contemporary art. The exhibition charts a course through more than 75 artworks and an extensive selection of documents—letters, drawings, photographs and films—taking in the great variety of facets the artist developed over his short but intense and prolific career (1954-1962).
Curated by: Daniel Moquay

The exhibition takes a chronological approach to examine three of the principal issues present in his work: monochromatism, the material nature of the flesh, and the immaterial character of art. The starting point is his double exhibition “Monochrome Propositions” held at the Colette Allendy and Iris Clert galleries in Paris (1957), which marked the beginning of his blue period. The exhibition reveals this monochromatic universe, based on the conception of a color (IKB, International Klein Blue) as a field of immaterial sensibility. These works show him taking a distance from the art of his day, which was contesting the virtues of abstraction and figuration. After experimenting with two-dimensional works, Klein began to work with objects and other elements, coating them in blue pigment to transform them into ultramarine sculptures. The development of his monochromatic works embodies a conception not just of color but of art, in which the paintings are only the “ashes” of the work, as the artist himself described it.

The works reveal the constant tension between the material and immaterial condition of art. Klein believed that the new art would arise in the construction of fields of sensibility, whether through the purity of Klein blue, through the experience of the void—as developed in his iconic pieces Leap into the Void, together with the newspaper documenting the event,Dimanche (1960)—or the paintings created with fire and air, as well as by reflecting on the value of the artwork. For Klein, art can only take place in space, and therefore as experience. Hence, in his Anthropometries, one of his best-known series, Klein executes the painterly act as a bodily, carnal action, though not that of the artist but rather of the bodies of models, covered in paint and used to leave an imprint on the canvas. When Klein produced the Anthropometry of the Blue Period (1960) he did so before a live audience, accompanied by models while musicians played the score to his Monotone-Silence Symphony (1949), a piece comprising a single note followed by a period of silence.

In this way, Klein’s radical and decisive agenda is developed in his works, the actions they involved and in the various manifestos and lectures he wrote and delivered over his career. This exhibition seeks to introduce the work of one of the key reference points in twentieth-century art to a broad audience. He was, perhaps, one of the first contemporary artists to integrate art and life into a single adventure.